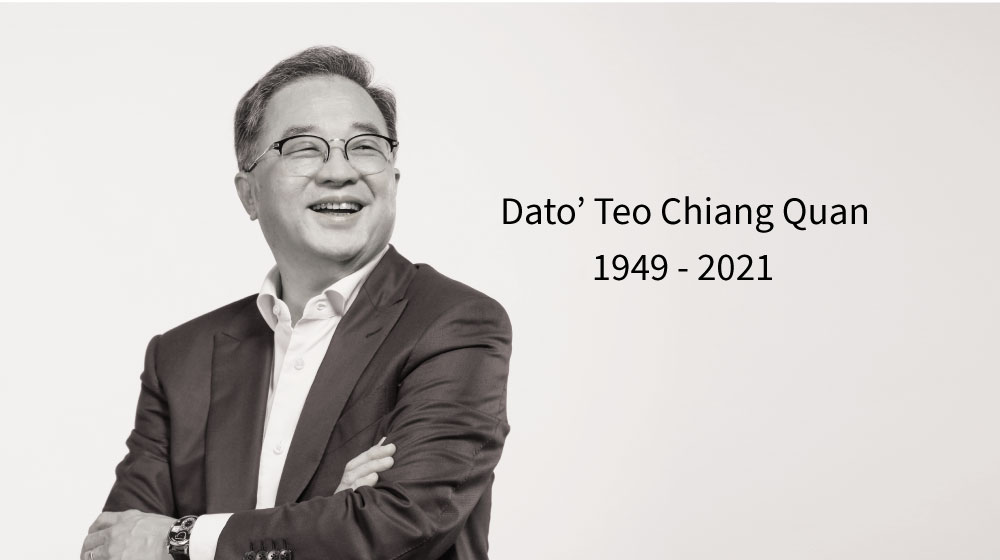 It is with profound sadness that Paramount Corporation Berhad (Paramount) announces that Dato’ Teo Chiang Quan, Chairman and Executive Director, passed away on the evening of 24 May 2021 due to complications from an unexpected illness. He was 72.

Over and above being an astute businessman and property developer, Dato’ Teo may best be described as a nation-builder.

He began his career in what was known as Malaysian Rice Mills (MRI) in 1976, which, in 1980, was renamed to Paramount Corporation Berhad. Through his leadership and determination to succeed, Dato’ Teo helped shape Paramount into the company it is today.

He became Chairman of the Board of Paramount on 8 June 2015 and provided leadership and guidance to its management in the formulation of the Group’s long-term strategic plans, particularly in the areas of land banking and communication with stakeholders.

On 19 July 2005, he was awarded ‘Datoship’, for his contribution to the progress and well-being of the Malaysian society. In 2019, he was awarded the accolade of FIABCI Property Man of the Year.

“He has been the cornerstone of our company, setting the vision and mission and epitomising our core values of TRIBE (Trust, Respect, Integrity, Bravery and Energy), which we hold dear to this day. Dato’ Teo’s life is also the inspiration for Paramount’s vision of ‘Changing lives and enriching communities for a better world,” said Group Chief Executive Officer, Jeffrey Chew.

“Dato’ Teo was a warm person who could strike up a conversation with anyone at any level. He had a great sense of responsibility and was generous with his employees. A man of strong principles, the Paramount family will always remember him for his work ethics and integrity as well as his relentless insistence on quality in everything we do,” he said.