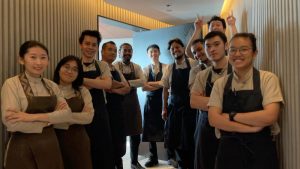 KUALA LUMPUR, March 29 — In the tenth edition of Asia’s 50 Best Restaurants awards sponsored by S Pellegrino & Acqua Panna, Dewakan was given the coveted Best Restaurant in Malaysia award, marking their number 50 entry in the list as the highest in the country.

Headed by the passionate Chef Darren Teoh, Dewakan showcases how local ingredients can be crafted into exquisite dishes that celebrate Malaysia’s rich bounty of produce.

The restaurant located at Sky Views, Naza Tower, just turned seven years old this month. This entry also marks Dewakan’s re-entry to the list, as they were number 46 back in 2019. Last year, they were ranked number 66 in the extended list.

Den in Tokyo, Japan, was crowned the coveted Best Restaurant in Asia award. Chef owner Zaiyu Hasegawa  is known as the pioneer of contemporary Japanese cuisine.

His iconic dish is his Dentucky Fried Chicken where glutinous rice is stuffed in the chicken wings and served in a fast food carton. It’s a momentous occasion for Japan as it’s the second time in 10 years that a Tokyo restaurant has made it to the top spot.

From Thailand, you have Sorn at number two while Le Du is number four on the list. Previous winner of the Asia’s Best 50 Restaurants The Chairman in Hong Kong was listed as number five.

The results were announced in a “live” telecast of the award ceremony on Facebook and YouTube. Simultaneously, in-person events were held in Bangkok, Macau and Tokyo where the chefs mingled to celebrate the results and don that coveted signature red scarf.