Maintain buy with a lower target price (TP) of RM2.18: We cut our financial year 2016-2018 (FY16-FY18) earnings forecasts by 7%,13% and 11% respectively on Paramount Corp Bhd to reflect the slower property sales, as well as the impact of private debt securities (PDS) distribution.

We expect the billings to pick up as construction works progress, underpinned by unbilled sales of RM342 million versus RM367 million in the fourth quarter of 2015 (4Q15). Property sales will likely be weaker as sales in Utropolis were temporarily affected by the secondary sales from Phase 1, which was completed in 4Q15.

In view of the weaker-than-expected new property sales of only RM54 million in 1Q16, we raise our discount to realised net asset value for the property segment to 50% (from 45%). Our TP is, hence, reduced to RM2.18 (from RM2.32), based on an unchanged 20% holding company discount.

As the plan for asset monetisation is still in place for this year, we maintain our “buy” rating on Paramount.

We believe the upcoming launches of Utropolis Batu Kawan in 3Q16 will be well received, given the strong demand for a new project by another developer nearby. This will help to achieve our sales target of about RM350 million to RM370 million for 2016.

1Q16 numbers were below our expectation. The slower progress billings were attributed to the late appointment of a main contractor in Sejati Residences and Salak Perdana, which is a new township project.

The weaker year-on-year (y-o-y) growth was also affected by the high base in 1Q15, as the progress billings peaked for the projects handed over in 4Q15.

Meanwhile, the quarter also saw a PDS distribution of RM5.2 million versus RM1.6 million per quarter over the last one year. — RHB Research, May 12 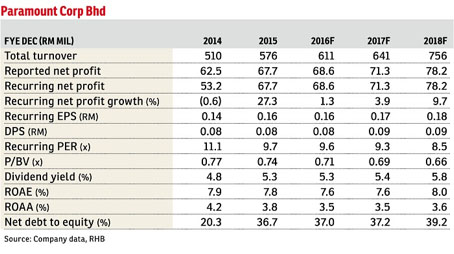