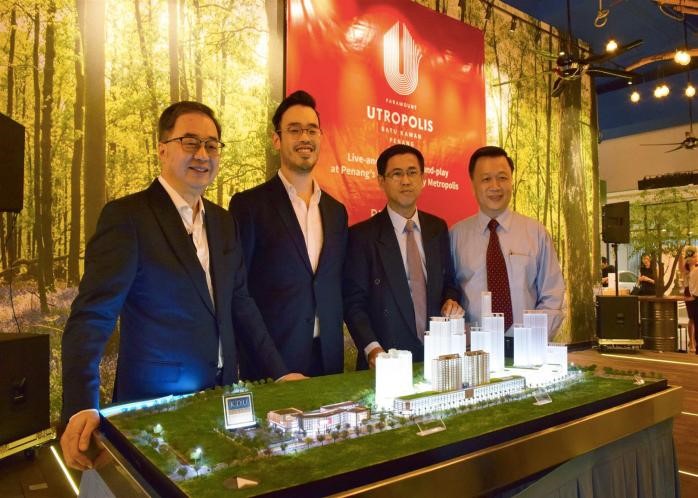 Group CEO Jeffrey Chew said Paramount Property (Utara) Sdn Bhd will be launching the third phase of Utropolis Glenmarie, a combination of 389 units of serviced apartments and a 3.5-star hotel at a gross development value (GDV) of RM300 million.

“The overall GDV of Utropolis Glenmarie is RM1 billion, excluding hotel and mall. Phase one is fully sold out, while there are only between 10 and 13 units remaining in phase two,” Chew said.

“Now, we are launching Utropolis Batu Kawan to be developed in four phases over the next 10 years. Groundworks for the first phase comprising 612 units have commenced and is scheduled for completion in second quarter of 2019 (2Q19),” he said yesterday after unveiling Penang’s first university metropolis, Utropolis Batu Kawan.

Anchored by a new flagship 10.5- acre campus for KDU Penang University College, owned and operated by Paramount Education, it will be the biggest purpose-built campus in Batu Kawan when fully completed.

Paramount has a total landbank of 800 acres across Selangor, Kedah and Penang. It operates two segments, namely, property and education. Its property arm contributes 70% to its turnover, while the remaining 30% comes from its education arm.

“This year, our target is to achieve RM450 million sales and are cautiously optimistic that we will achieve the target,” he said.

He noted that Paramount Property foresees a vibrant future for its property business moving forward, despite the softening property market, as it offers niche products to its customers.

“Next year, we are going to launch a project located in Petaling Jaya’s (PJ) Seksyen 13, another development in Klang, while our remaining projects in other regions run concurrently.

“In the past, we used to have only four to five projects a year, but next year, between eight and nine projects will run concurrently. At present we do not have any overseas projects, but our projects in Malaysia will keep us busy,” said Chew.

The PJ Seksyen 13 project is an integrated development located on 5.2 acres of land with a self-contained one-stop business, home and leisure concept, catering to the new-age community.

Another project being developed is a 29-acre integrated development, located in Jalan Goh Hock Huat in the heart of the Klang city centre.

Chew said the hotel business is part of Paramount’s recurring income strategy under its property segment.

“We are in talks with an international hotel chain to operate our soon-to-be built hotel in Utropolis Glenmarie. It will be a joint-venture engagement where we outsource operations to them. The discussions are in the final stages and we will make an official announcement in 1Q17,” he said.

Paramount’s educational institutions include Sri KDU schools, and KDU College in PJ, Shah Alam and Penang. Chew expects student enrolment to increase going forward due to price competitiveness as a result of the weakening ringgit.