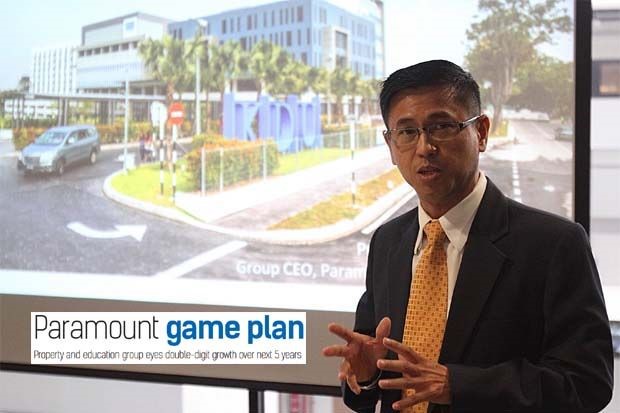 Five more projects, he said, were expected to be launched by 2016, including another university college campus planned in Batu Kawan, Penang, which is targeted to start operations in 2019. “That’s the only way to harvest the RM9.1bil gross development value (GDV) that we have. We are in the process of building capacity in terms of infrastructure and people,” Chew said. (Tue, 10. February 2015 file pic by The Star’s Low Boon Tat shows Paramount Corporation Berhad group CEO Jeffrey Chew giveing a presentation on the new KDU University College campus at Utropolis in Glenmarie, Shah Alam.)

Helmed by former banker Jeffrey Chew, who was made group chief executive officer of the property group in July last year, Paramount has four property development projects running concurrently with an average of about five years of construction left to go.

Five more projects, he said, were expected to be launched by 2016, including another university college campus planned in Batu Kawan, Penang, which is targeted to start operations in 2019.

“That’s the only way to harvest the RM9.1bil gross development value (GDV) that we have. We are in the process of building capacity in terms of infrastructure and people,” Chew, who was formerly OCBC Bank (M) Bhd chief executive, told reporters yesterday.

He said the company’s core growth strategies included expanding and replenishing its landbank, currently around 364.2ha, as well as maintaining a property development plan consisting of 30% landed townships and 70% mixed developments.

“Our landed townships will be situated slightly out of urban areas while our integrated mixed developments will be in the Klang Valley and Penang. In two to three years, we will have four projects running in the north and five in central and we will have two strong groups managing it,” he said.

Chew said another growth strategy was to offer innovative product development with a lifestyle theme, such as its integrated development Paramount Utropolis located in Glenmarie, Shah Alam. The entire development is anchored by the KDU University College campus that can accommodate 7,000 students.

He said Paramount would also seek to establish recurring income streams through its investment properties, such as the Paramount Utropolis that featured 100,000 sq ft of retail space for rent.

As for its education arm, Chew said it would organically grow its student numbers through focused marketing and distribution, as well as develop and widen programme offerings that were industry relevant.

He said it would also replicate the Paramount Utropolis strategy for its second university campus integrated mixed development in Batu Kawan and would be embarking on an aggressive enrolment drive over the next four years.

He added that it would be launching the successful Sri KDU brand (consisting of national primary and secondary schools, as well as an international school) in new markets, with one in Klang being an identified project in the pipeline.

“We have reached maximum capacity over the past two years and we want to leverage our reputation to build a school in Jalan Goh Hock Huat in Klang. There is quite a fair bit of demand for international and national schools in the area because there are quite a lot of rich parents there,” he said.

Chew said there were also several strategic options available for Paramount over the next few years, including pursuing an asset-light balance sheet with a sale and lease-back of its education assets.

“This will drive our RoE (return on equity), currently about 8%, to beyond double digit. Our balance sheet is strong enough to drive our projects but this is something we’d like to do as it will lift our RoE and lower our leverage,” he said.

He said it was also improving its human resources via performance-based compensation and benefit packages, such as its long-term incentive plan, focusing strongly on increasing its brand presence among millennials and Gen Z’s, and exploring branding synergies.

On his outlook for the property and education sectors for the next five years, he said the property market was still very robust for houses in the RM400,000 to RM800,000 range, while its focus on building quality and premier education products would allow it to increase its pricing over time.

“Our added strength is the ability to combine both sectors and draw synergies from them, which is unique compared to other players in the market. For the industry outlook, I would say it’s still fairly positive over the next five years,” he said.

On the expected impact of the goods and services tax (GST) come April, Chew said his projections were for costs to go up 1%–2% and 2%-3% for the education and property projects, respectively.

Chew noted that not all its costs were related to the GST, adding that he expected to see overall costs go up by 3% this year, taking into account factors such as the weakening ringgit and GST.

“Property margins were very strong in the past. As we move to the more affordable segment, it may come down a little but I think we have a strong advantage because of our GDV. Even with slightly tighter margins, we will still generate a huge amount of growth over the next five years,” he said.