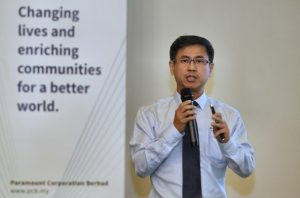 SHAH ALAM (Aug 28): Paramount Corp Bhd said today the real estate developer is planning new property launches worth some RM900 million in the second half of 2019 to achieve its RM1 billion sales target for the year.

“As at end-June 2019, the group has unbilled sales of about RM978 million,” Chew told reporters here today during a fund managers and analysts’ briefing on Paramount’s financials.

He said the unbilled sales is expected to provide clear earnings visibility for the group in the next three years.

He said the group has existing co-working spaces within Shah Alam’s Glenmarie and Sekitar 26 enclaves besides The Starling mall in Petaling Jaya and Naza Tower within the Kuala Lumpur City Centre.

“We hope that this business (co-working) can get RM20 million to RM30 million in terms of revenue for the next three to five years. We have secured a turnover of RM1.3 million for the first half of this year. For the full-year, the number will double to RM3 million to RM4 million as we have more locations.

“Next year, we are looking to further grow the number to RM12 million to RM15 million,”  Chew said.