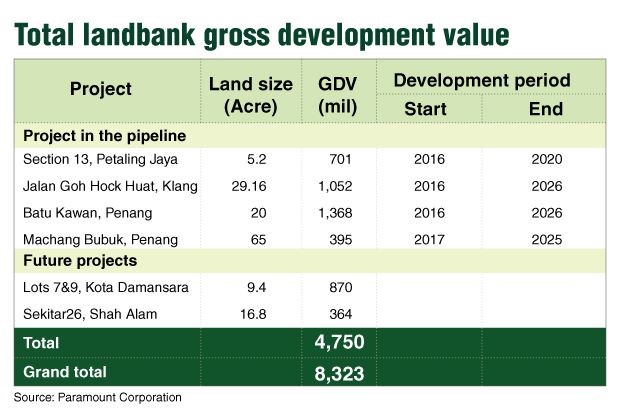 KUALA LUMPUR: Paramount Corporation earnings rose 70% to RM23.91mil in the second quarter ended June 30,2016, boosted by its property business and this saw the company declaring a dividend of 2.5 sen a share.

“The group’s performance in 2Q2016 improved significantly after a lacklustre 1Q2016 performance,” it said, adding the property division’s sales improved due to its higher priced products.

“In addition, construction works on its developments returned to full swing after the shorter 1Q2016 due to the festive holidays.

“The education division also recorded a better performance due to higher student enrolment at KDU University College (KDU UC) albeit with its results largely boosted by gains recognised on the sale of apartments formerly occupied by students that were no longer required following KDU UC’s move to its new campus at Utropolis, Glenmarie,” it said.

Paramount said that when compared with Q2, 2015, the current quarter saw the property division’s revenue increase by 39% to RM107.6mil from RM77.7mil a year ago due to higher progressive billings recorded across all its developments and higher sales.

Due to the higher revenue, profit before tax for the property division increased by 43% to RM24.6mil from RM17.2mil a year ago.

As for the education division (comprising the primary and secondary schools and the tertiary education units), the revenue was maintained at RM37.4mil, similar to a year ago.

However, profit before tax rose 112% to RM13mil from RM6.1mil a year ago due to a gain of RM6.4mil recorded from the sale of apartments.

For the first half, its earnings fell 10% to RM33.60mil from RM37.3mil in the previous corresponding period due to lower contribution from the property division. Revenue slipped 8% to RM258.6mil from RM280.3mil.