At a time when many property developers have been avoiding new launches and are still struggling to clear their inventories, one particular company has been enjoying strong double-digit growth in property sales.

What’s more exciting is that the company expects the stellar sales performance to continue in the fourth quarter and is prepared to kick start new launches, making it a strong proxy for the recovery play in the property sector.

The odds-defying company is Paramount Corp Bhd, which enjoys the highest return on equity (ROE) and the fifth highest dividend yield among the listed property players.

Despite the RMCO and CMCO, Paramount has achieved more property sales in the third quarter ended Sept 30, 2020 (3Q20), as compared to a year earlier when the world was still free from COVID-19.

On the back of stronger sales and cost optimisation efforts, the property division’s pre-tax profits more than doubled to RM36.8mil from just RM18.2mil in the previous corresponding quarter.

It is noteworthy that the property division’s bottomline has also factored in an impairment loss of RM1.9mil.

For perspective, Investment & Others refers to the 20% equity interest Paramount still owns in its tertiary education group after disposing of its controlling stake on Feb 20, 2020.

Excluding the earnings contribution of the discontinued education business, Paramount’s overall net profit for 3Q20 grew by a substantial 2,265% y-o-y to RM26.09mil.

Actually, Paramount’s strong property sales after MCO was lifted in May is not entirely surprising.

Its CEO Jeffrey Chew has previously told BFM that the company has gotten some of the highest in terms of booking in June, July and August.

“By August, we ran out of good products to sell, and so sales came down a little bit.

“We had about RM270mil bookings in June, July had RM380mil, and we haven’t seen that kind of numbers in the last 3 to 4 years,” Chew said.

He added that sales were across the board of Paramount’s eight property projects.

Moving forward, Paramount is backed by its unbilled sales of RM1.03bil and this provides some visibility on the company’s cashflow in the near term.

In its latest filing with the stock exchange, Paramount said it intends to capitalise on the strong sales momentum generated in 3Q20 and intensify promotional activities to boost sales.

In addition to the unbilled sales, Paramount is also backed by its 443 acres of undeveloped landbank, of which about 59% are located in Penang and Kedah. The remaining lands are in Klang Valley.

“In addition, the Group completed in October 2020 the purchase of 4.542 acres of land, with buildings erected thereon, for redevelopment. The land is located at Jalan Ampang Hilir, within the prestigious U-Thant enclave of Kuala Lumpur City Centre.

“The proposed development has a projected gross development value of RM863mil, and is expected to commence in the third quarter of 2021 and completed over a period of five years,” Paramount said.

While the domestic property market remains to be weighed down by uncertainties, Paramount sees opportunities from the measures under the Home Ownership Campaign and Budget 2021.

Meanwhile, Paramount via its Co-labs Coworking segment would also benefit from the rising demand for flexible workplace and the change in business landscape following the pandemic.

In the first nine months ended Sept 30, the revenue contribution from the Co-labs Coworking segment leapt by 42% y-o-y to RM3.2mil.

After selling over 1,000 units in the first nine month ended Sept 30, Paramount has managed to reduce its inventories.

Currently, it has 11 ongoing projects which are expected to be completed between 2020 to 2028.

The remaining Gross Development Value is over RM6bil, spanning over 373.8 acres of land.

Looking at its cash flow statement, Paramount has managed to reduce its leverage level as borrowings as of Sept 30, 2020 fell to RM729.1mil as compared to RM912mil by end-2019.

As a result of lower borrowings and increased cash, Paramount’s net debt to equity ratio has declined to 0.3 times as compared to 0.53 times as of Dec 31, 2019.

Paramount is well-positioned to benefit from the demand recovery in the property sector, considering that its ongoing developments and landbanks are in strategic locations. 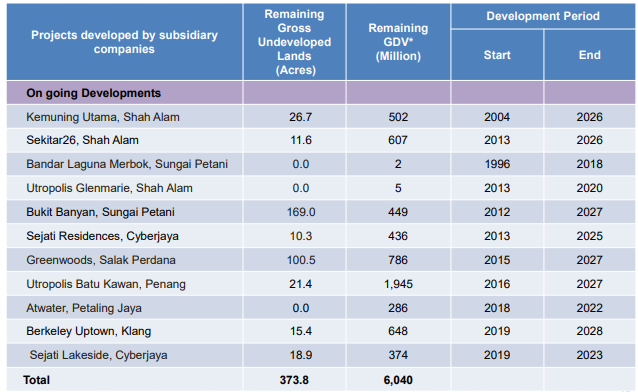 As construction activities of Paramount have returned pre-pandemic level, there is little reason to doubt whether the company will see another round of strong results in the current fourth quarter.

As published: I3 Investor