Penang, 8 January 2023: Some 2,500 men and women, including the Penang Governor, cycled 66 km across two Penang bridges at the Penang Fellowship Ride, Bridge to Bridge 2023 this morning.

At 7am, cyclists rode from Queen Waterfront, went across the 13.5-km Penang first bridge, cycled through a section of Juru to UOW Malaysia KDU Penang University College campus at Utropolis Batu Kawan, where they rested and refuelled with snacks and drink, before cycling back to the island using the 24-km Sultan Abdul Halim Mu’adzam Shah Bridge.

Paramount Property Northern CEO Ooi Hun Peng said Paramount Property was both proud and privileged to be the title sponsor because the event brought people of all races, ages, and beliefs together for healthy fun and fellowship. The event also attracted cyclists from Singapore, Australia and Japan.

“Paramount Property champions healthy activities that bring communities together. This is part of our corporate social responsibility to uplift the communities where we operate,” he said.

“As the People’s Developer, we build homes, commercial spaces and townships that promote healthy community living. We have organised and supported various community activities.”

“I can’t think of a more exciting and energetic way to start 2023 – cycling across two bridges, one of which is the second longest in South-East Asia! Cycling is a good activity to challenge your mental strength and stamina, and to bring the community together.”

Ooi also encouraged the cyclists to promote goodwill and fellowship in their respective circles of friends and families when they leave the event.

“I ask you to strengthen the spirit of fellowship that is being promoted today, I ask you to act as bridges, just like the bridges that you rode over, to connect people, and to build the community spirit beyond race, religion, age and gender.

“We can actively and consciously be more kind to one another, to our colleagues, neighbours, those less fortunate, and last but not least, our relatives and family members.

“Let us be the bridges and the ambassadors of fellowship and goodwill in the community. Then truly, the Penang Fellowship Ride will be a success far beyond today,” he said.

The cycling event was organised by the Penang State Government, the Sports Council, G Club Penang Cyclists, with the help of Majlis Bandaraya Pulau Pinang, the Majlis Bandaraya Seberang Perai and the Polis Diraja Malaysia.

The Penang State Government-led bridge to bridge cycle was renamed ‘Penang Fellowship Ride Bridge to Bridge 2023’ to reflect the goal of the non-competitive fun cycling event. Its 2019 name was ‘Penang International Bridge to Bridge Ride’. 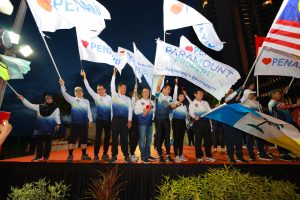 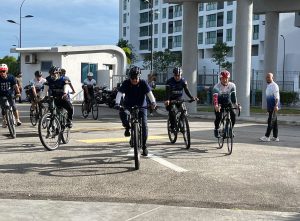