Things got heated up at B.I.G. Ben’s Independent Grocer in Publika today when secondary school students from across Klang Valley showed off their cooking skills in the KDU MY Challenge 2013 Culinary Arts competition.

Sixteen aspiring chefs forming eight teams competed to be the top KDU MY Challenge 2013 culinary champions. Along the way, they impressed a few judges including one celebrity chef.

Known for his show “The Boss” on the Asian Food Channel, Chef Bruce Lim was in town to put to test the cooking abilities of students competing in this event. Sitting together with him on the panel of judges were four other chefs from KDU University College’s School of Hospitality, Tourism and Culinary Arts – Chef Darren Teoh, Chef Kenneth Kam, Chef Neo Ch’ng Yee and Chef Mohd Maharis bin Mamat.

Chef Bruce Lim was invited by KDU University College (UC) for a meet-and-greet session with students in the department last year. He was back again this year for a similar session at KDU UC while taking on an expanded role as guest judge in the KDU MY Challenge 2013 Culinary Arts finals.

The KDU MY Challenge is the first of a series of events that are running in conjunction with the KDU Education Group’s 30th Anniversary this year.

“This is essentially a talent competition which mirrors KDU’s philosophy of letting every student shine. It provides a platform for all secondary school students in the Klang Valley to develop and showcase their talents in the areas of performing arts, creative design and imaginative expressions,” said Professor Khong Yoon Loong, Vice Chancellor of KDU UC.

In total, there are six events in this competition: Solo Singing, Band, Modern Dancing, Short Film, Photography and Culinary Arts. Each participating school can send a contingent of students to take part in up to a maximum of six events.

For the Culinary Arts event, teams were given RM50 each to do their grocery shopping at B.I.G. Ben’s Independent Grocer. During the finals, each team was required to prepare a stuffed chicken dish which was then judged based on Taste & Quality, Level of Difficulty, Creative Presentation and Cleanliness & Hygiene.

“Basically what this competition does is to offer students a platform to showcase their talents and perhaps, even spark a future career in the culinary arts. I am honoured to have been invited to be a judge at the KDU MY Challenge culinary event and I’m hoping to inspire these students in any way I can,” said Chef Bruce Lim.

“We truly didn’t expect to win. In fact, we were initially hesitant to even participate in the KDU MY Challenge contest because of our lack of confidence. However, the organisers were very helpful and the support from our family and friends gave us the boost we needed to move forward,” said a visibly excited Nur Syahira.

The silver medal was won by Brian Ee How Mun and Foong Sioh Kee from SM Sri Sempurna while the bronze medal went to Lee Ning and Tan Jia Yann from SMJK Katholik.

The KDU MY Challenge competition will culminate in a Grand Finals on 25 August at the MBPJ Civic Hall. The school that accumulates the highest scores from all six events will win the title of ‘Champion School of the Year 2013’, an accolade that comes with a cash prize of RM20,000.

For more information and updates on KDU MY Challenge, please connect with us on https://www.facebook.com/kdu.universitycollege 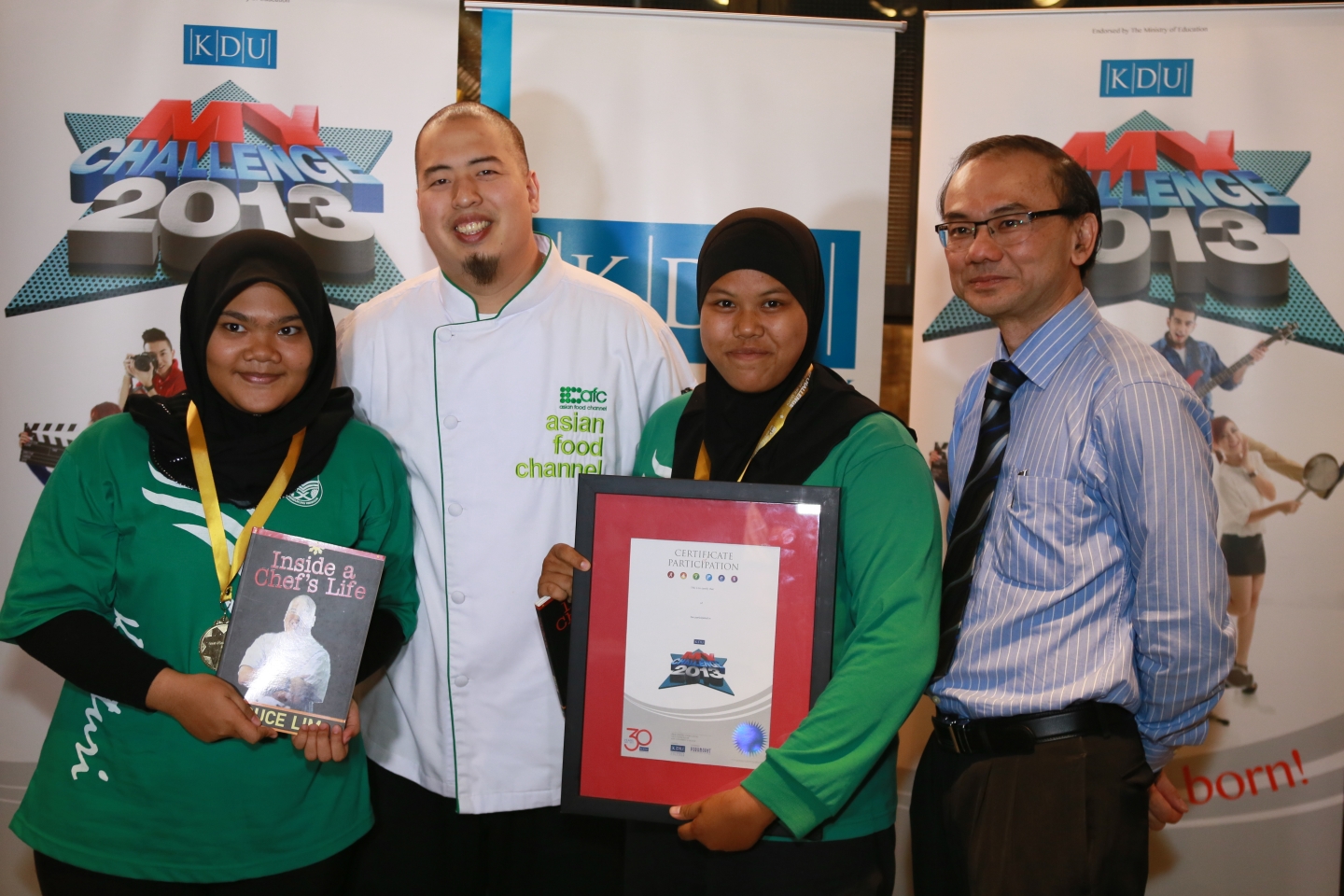 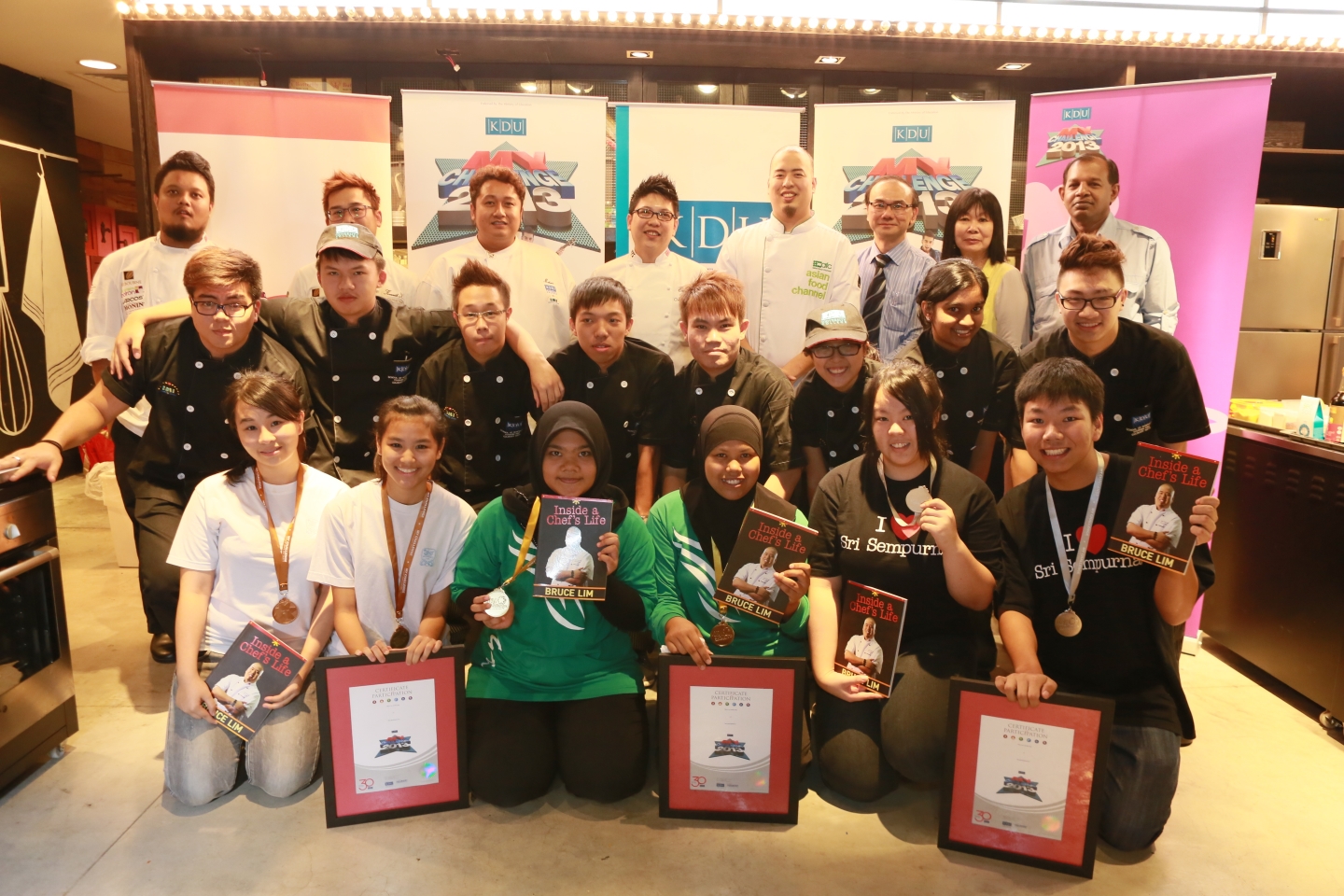